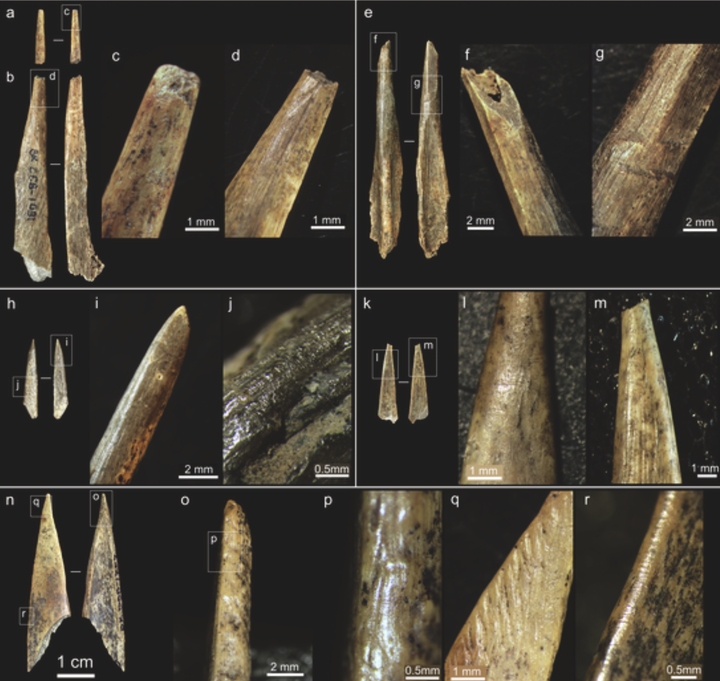 The expansion of Homo sapiens and our interaction with local environments, including the replacement or absorption of local populations, is a key component in understanding the evolution of our species. Of special interest are artifacts made from hard animal tissues from layers at Bacho Kiro Cave (Bulgaria) that have been attributed to the Initial Upper Paleolithic. The Initial Upper Paleolithic is characterized by Levallois-like blade technologies that can co-occur with bone tools and ornaments and likely represents the dispersal of H. sapiens into several regions throughout Eurasia starting by 45 ka or possibly earlier. Osseous artifacts from the Initial Upper Paleolithic are important components of this record and have the potential to contribute to our understanding of group interactions and population movements. Here, we present a zooarchaeological, technological, and functional analysis of the diverse and sizable osseous artifact collection from Bacho Kiro Cave. Animal raw material sources are consistent with taxa found within the faunal assemblage including cervids, large bovids, and cave bears. A variety of bone tool morphologies, both formal and informal, indicate a diverse technological approach for conducting various on-site activities, many of which were focused on the processing of animal skins, likely for cold weather clothing. Technological flexibility is also evident in the manufacture of personal ornaments, which were made primarily from carnivore teeth, especially cave bear, though herbivore teeth and small beads are also represented. The osseous artifacts from Bacho Kiro Cave provide a series of insights into the bone technology and indirectly on the social aspects of these humans in southeast Europe, and when placed within the broader Initial Upper Paleolithic context, both regional and shared behaviors are evidently indicating widespread innovation and complexity. This is especially significant given the location and chronology of the site in the context of H. sapiens dispersals.